Here’s Who’s Coming Up On KIX Live This Week! 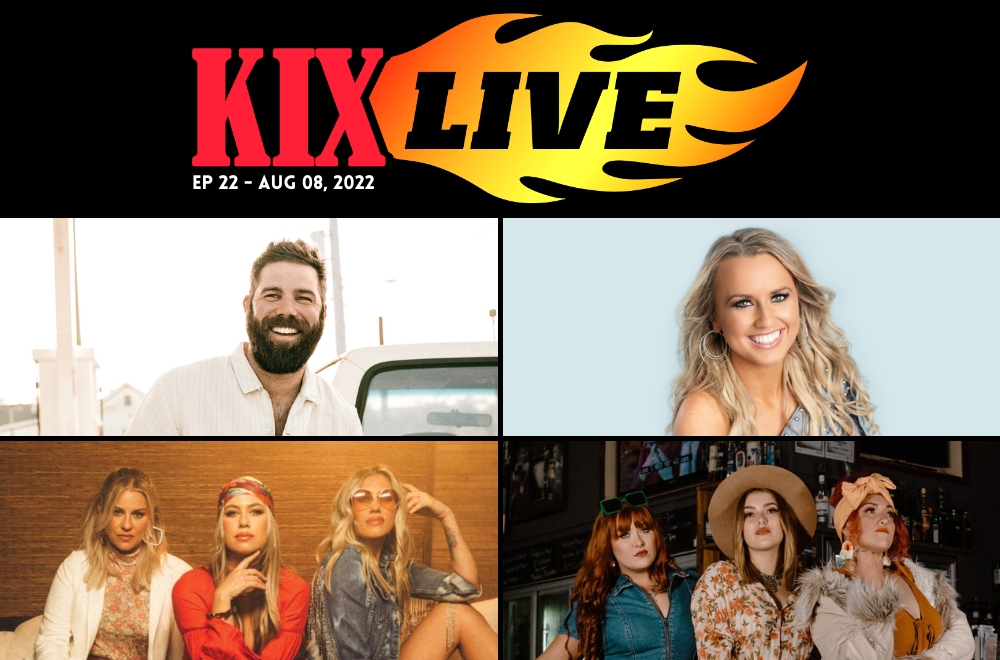 On Monday, August 8 at 7pm, KIX Live will feature performances from Christie Lamb, Vixens Of Fall and Dozzi, plus Justin will chat Jordan Davis and announce the week's 'Centre Stage' artist.

Louisiana-native Jordan Davis is a contemporary country singer who blends pop, modern R&B, and hip-hop with a solid country foundation. He moved to Nashville in 2012 where he spent several years working as a professional songwriter before working on his own music.

He released his debut album, Home State in 2018, which racked up over one billion streams and features three number one, platinum-certified tracks Single You Up, Take It From Me and Slow Dance In a Parking Lot.

His self-titled EP followed and earned Jordan the award for ‘Best New Country Artist’ at the iHeart Radio Music Awards in 2019 as well as an ACM Award nomination for a ‘Best New Male Artist of Year’. His 2021 EP, Buy Dirt features the Top 15 single Almost Maybes as well as a collaboration with country superstar Luke Bryan on the title track.

Christie has been a part of national tours with Lee Kernaghan for years, opening the show and playing piano and mandolin as part of his band. Earlier tours have included two years with Aussie legend Jon English on ‘The Rock Revolution’ tour, ‘The Girls of Country’ tour with Amber Lawrence and Aleyce Simmonds, plus ‘This Crazy Life’ tour with The Wolfe Brothers.

Comprised of Nina, Wren and Lulu, the sisters were born and raised in the tropical north city of Cairns. The Eagles, Fleetwood Mac, Chuck Berry, Eric Clapton and Creedence Clearwater Revival were all a part of their Father’s morning repertoire and began the trio’s early passion for song. The sisters took to performance early, taking part in ballet, dance, and drama groups.

They moved to Brisbane in 2000 and started their professional singing career at the Urban Country Music Festival in 2016 and have since made regular appearances at the Gympie Music Muster and Tamworth Country Music Festival. Vixens of Fall released their debut EP, A Love Likes Ours in 2019.

2022 continues to be a busy year for the Queensland natives. As well as embarking on a string of headline shows across the sunshine state, the sisters will open for Daryl Braithwaite at the Mt. Isa Street Festival and will appear at the fan favourite, Gympie Music Muster, in August.

Since their first Nashville-based release Worth the Wait EP in 2019, Brisbane sister trio, Dozzi has built a solid platform in their new home city. The EP was recognised in Rolling Stone and Billboard, and the girls are now regular performers at downtown venues such as Dierks Bentley's Whiskey Row and Blake Shelton's Ole Red and have performed alongside artists such as Ashley McBryde, Mitchel Tenpenny and BRELAND at events and festivals across the USA.